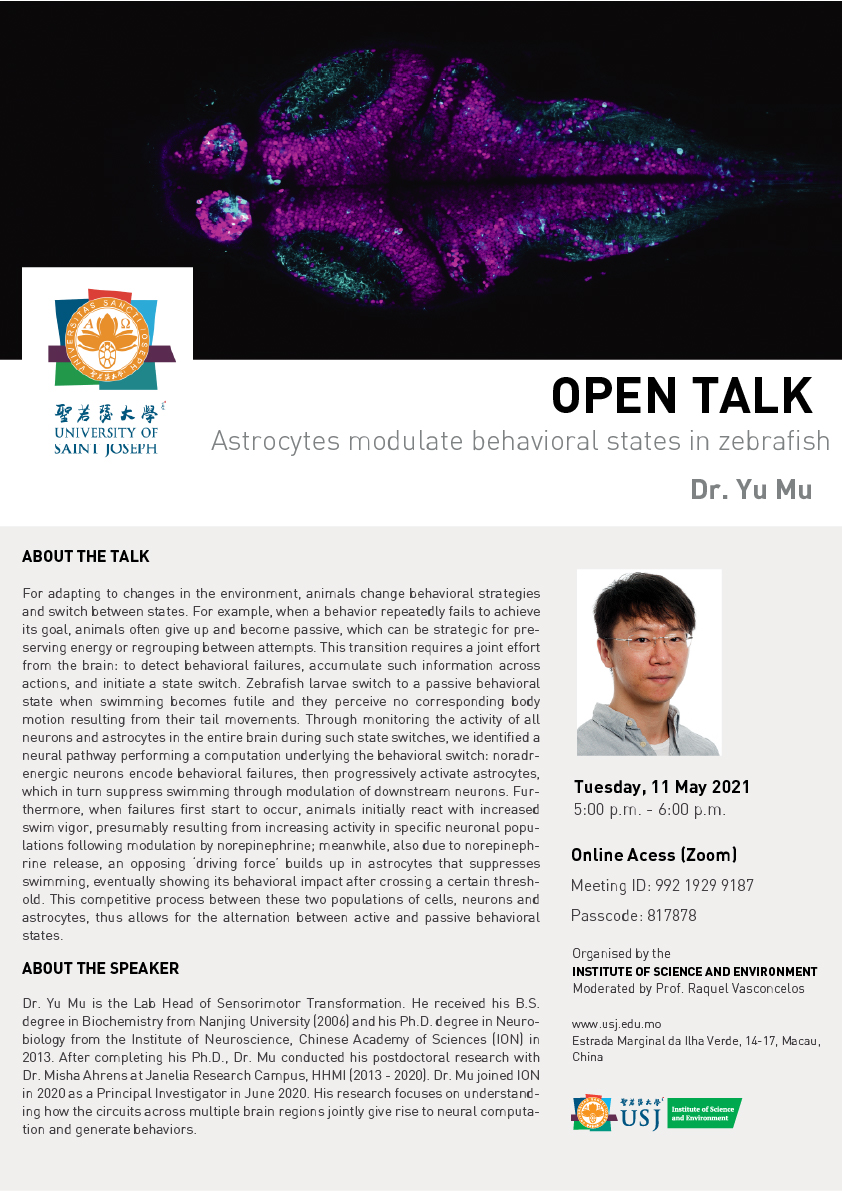 For adapting to changes in the environment, animals change behavioral strategies and switch between states. For example, when a behavior repeatedly fails to achieve its goal, animals often give up and become passive, which can be strategic for preserving energy or regrouping between attempts. This transition requires a joint effort from the brain: to detect behavioral failures, accumulate such information across actions, and initiate a state switch. Zebrafish larvae switch to a passive behavioral state when swimming becomes futile and they perceive no corresponding body motion resulting from their tail movements. Through monitoring the activity of all neurons and astrocytes in the entire brain during such state switches, we identified a neural pathway performing a computation underlying the behavioral switch: noradrenergic neurons encode behavioral failures, then progressively activate astrocytes, which in turn suppress swimming through modulation of downstream neurons. Furthermore, when failures first start to occur, animals initially react with increased swim vigor, presumably resulting from increasing activity in specific neuronal populations following modulation by norepinephrine; meanwhile, also due to norepinephrine release, an opposing ‘driving force’ builds up in astrocytes that suppresses swimming, eventually showing its behavioral impact after crossing a certain threshold. This competitive process between these two populations of cells, neurons and astrocytes, thus allows for the alternation between active and passive behavioral states.

Dr. Yu Mu is the Lab Head of Sensorimotor Transformation. He received his B.S. degree in Biochemistry from Nanjing University (2006) and his Ph.D. degree in Neurobiology from the Institute of Neuroscience, Chinese Academy of Sciences (ION) in 2013. After completing his Ph.D., Dr. Mu conducted his postdoctoral research with Dr. Misha Ahrens at Janelia Research Campus, HHMI (2013 – 2020). Dr. Mu joined ION in 2020 as a Principal Investigator in June 2020. His research focuses on understanding how the circuits across multiple brain regions jointly give rise to neural computation and generate behaviors.

Organised by: Institute of Science and Environment
Moderated by: Prof. Raquel Vasconcelos