Public lecture: Endocrine and Paracrine Control of Folliculogenesis in the Zebrafish 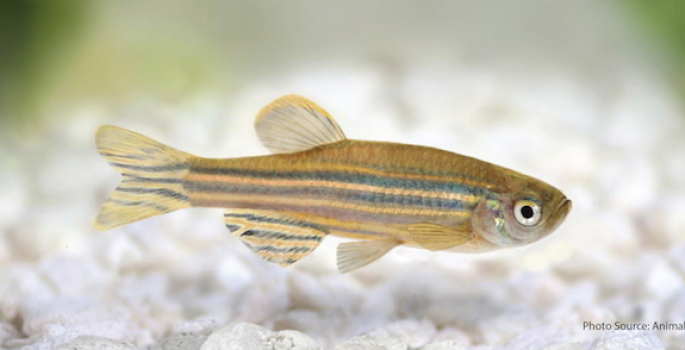 Endocrine and Paracrine Control of Folliculogenesis in the Zebrafish, by Prof Wei GE 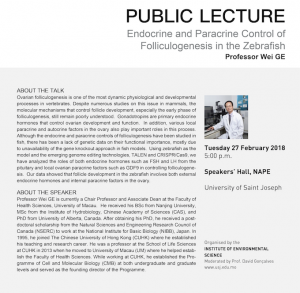 Ovarian folliculogenesis is one of the most dynamic physiological and developmental processes in vertebrates. Despite numerous studies on this issue in mammals, the molecular mechanisms that control follicle development, especially the early phase of folliculogenesis, still remain poorly understood.  Gonadotropins are primary endocrine hormones that control ovarian development and function.  In addition, various local paracrine and autocrine factors in the ovary also play important roles in this process.  Although the endocrine and paracrine controls of folliculogenesis have been studied in fish, there has been a lack of genetic data on their functional importance, mostly due to unavailability of the gene knockout approach in fish models.  Using zebrafish as the model and the emerging genome editing technologies, TALEN and CRISPR/Cas9, we have analyzed the roles of both endocrine hormones such as FSH and LH from the pituitary and local ovarian paracrine factors such as GDF9 in controlling folliculogenesis.  Our data showed that follicle development in the zebrafish involves both external endocrine hormones and internal paracrine factors in the ovary.

Professor Wei GE is currently a Chair Professor and Associate Dean at the Faculty of Health Sciences, University of Macau.  He received his BSc from Nanjing University, MSc from the Institute of Hydrobiology, Chinese Academy of Sciences (CAS), and PhD from University of Alberta, Canada. After obtaining his PhD, he received a postdoctoral scholarship from the Natural Sciences and Engineering Research Council of Canada (NSERC) to work at the National Institute for Basic Biology (NIBB), Japan. In 1995, he joined The Chinese University of Hong Kong (CUHK) where he established his teaching and research career. He was a professor at the School of Life Sciences at CUHK in 2013 when he moved to University of Macau (UM) where he helped establish the Faculty of Health Sciences. While working at CUHK, he established the Programme of Cell and Molecular Biology (CMB) at both undergraduate and graduate levels and served as the founding director of the Programme.