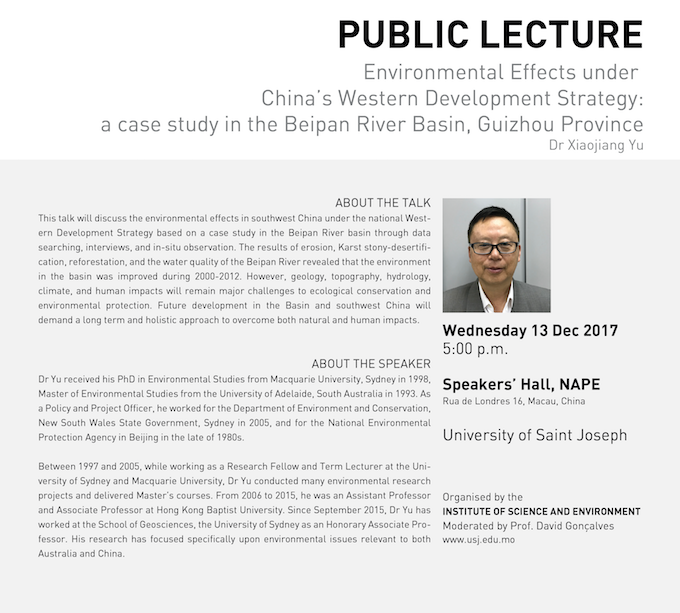 By Dr Xiaojiang Yo (School of Geosciences, the University of Sydney) 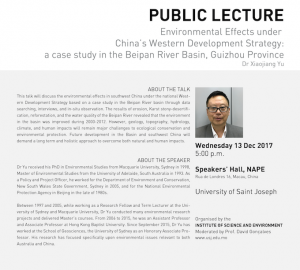 This talk will discuss the environmental effects in southwest China under the national Western Development Strategy based on a case study in the Beipan River basin through data searching, interviews, and in-situ observation. The results of erosion, Karst stony-desertification, reforestation, and the water quality of the Beipan River revealed that the environment in the basin was improved during 2000-2012. However, geology, topography, hydrology, climate, and human impacts will remain major challenges to ecological conservation and environmental protection. Future development in the Basin and southwest China will demand a long term and holistic approach to overcome both natural and human impacts.

Between 1997 and 2005, while working as a Research Fellow and Term Lecturer at the University of Sydney and Macquarie University, Dr Yu conducted many environmental research projects and delivered Master’s courses. From 2006 to 2015, he was an Assistant Professor and Associate Professor at Hong Kong Baptist University. Since September 2015, Dr Yu has worked at the School of Geosciences, the University of Sydney as an Honorary Associate Professor. His research has focused specifically upon environmental issues relevant to both Australia and China.