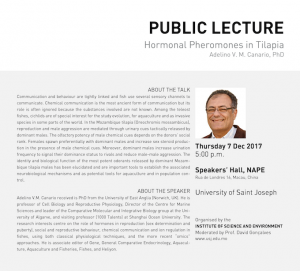 Communication and behaviour are tightly linked and fish use several sensory channels to communicate. Chemical communication is the most ancient form of communication but its role is often ignored because the substances involved are not known. Among the teleost fishes, cichlids are of special interest for the study evolution, for aquaculture and as invasive species in some parts of the world. In the Mozambique tilapia (Oreochromis mossambicus), reproduction and male aggression are mediated through urinary cues tactically released by dominant males. The olfactory potency of male chemical cues depends on the donors’ social rank. Females spawn preferentially with dominant males and increase sex steroid production in the presence of male chemical cues. Moreover, dominant males increase urination frequency to signal their dominance status to rivals and reduce male-male aggression. The identity and biological function of the most potent odorants released by dominant Mozambique tilapia males has been elucidated and are important tools to establish the associated neurobiological mechanisms and as potential tools for aquaculture and in population control.

Adelino V.M. Canario received is PhD from the University of East Anglia (Norwich, UK). He is professor of Cell Biology and Reproductive Physiology, Director of the Centre for Marine Sciences and leader of the Comparative Molecular and Integrative Biology group at the University of Algarve, and visiting professor (1000 Talents) at Shanghai Ocean University. The research interests centre on the role of hormones in reproduction (sex determination and puberty), social and reproductive behaviour, chemical communication and ion regulation in fishes, using both classical physiological techniques, and the more recent “omics” approaches. He is associate editor of Gene, General Comparative Endocrinology, Aquaculture, Aquaculture and Fisheries, Fishes, and Heliyon.