Public lecture: What can we learn from pipefish: from sexual selection to climate change (and back again) 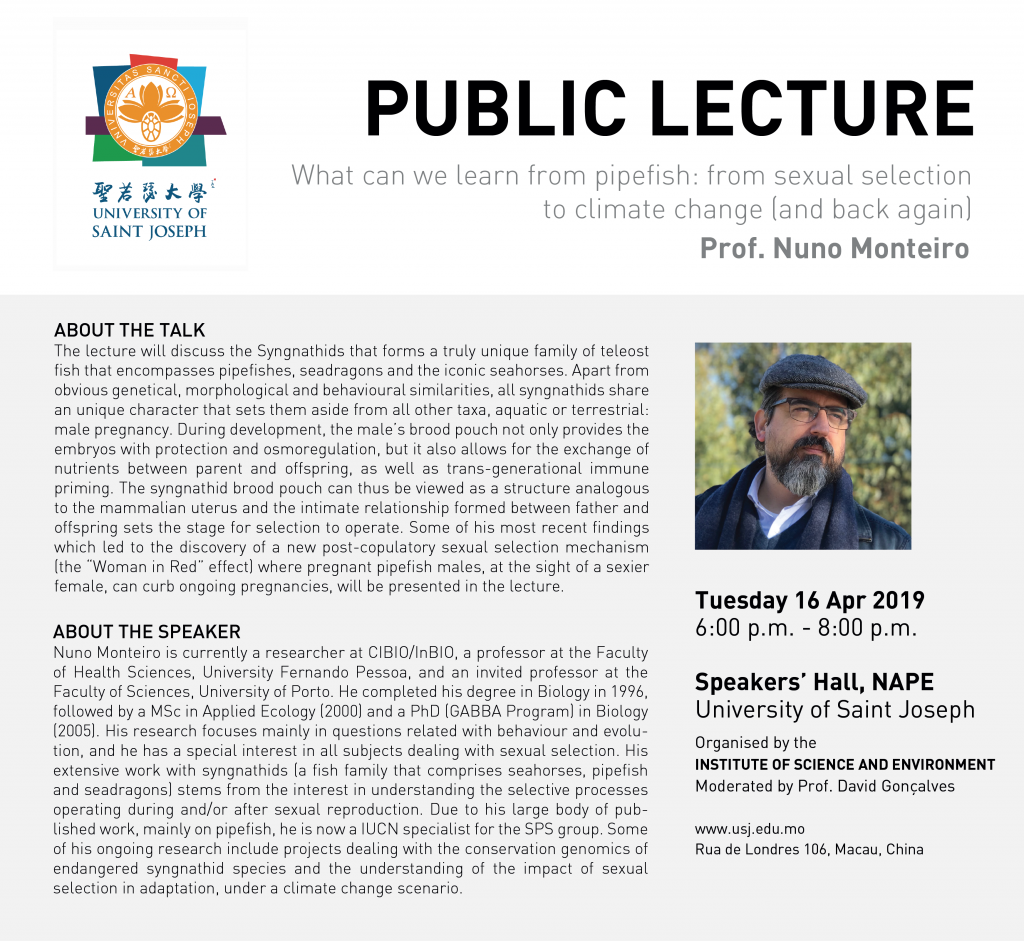 The lecture will discuss the Syngnathids form a truly unique family of teleost fish that encompasses pipefishes, seadragons and the iconic seahorses. Apart from obvious genetical, morphological and behavioural similarities, all syngnathids share an unique character that sets them aside from all other taxa, aquatic or terrestrial: male pregnancy. During development, the male’s brood pouch not only provides the embryos with protection and osmoregulation, but it also allows for the exchange of nutrients between parent and offspring, as well as trans-generational immune priming. The syngnathid brood pouch can thus be viewed as a structure analogous to the mammalian uterus and the intimate relationship formed between father and offspring sets the stage for selection to operate. Some of his most recent findings which led to the discovery of a new post-copulatory sexual selection mechanism (the “Woman in Red” effect) where pregnant pipefish males, at the sight of a sexier female, can curb ongoing pregnancies, will be presented in the lecture.

Apart from male pregnancy, some syngnathid species also display sex-role reversal (i.e., females actively compete for male access while males tend to be the choosier sex). This uncommon characteristic has converted sex-role reversed pipefish into extensively used mirror-like model species to address questions related with sexual selection. I will present some of our own results with pipefish, from showing how sex roles are not fixed and can be quickly adjusted according to social surroundings, to depicting the dynamic nature of sexual selection, whose intensity is prone to fluctuate both seasonally and spatially. I will also show how we discovered, in the worm pipefish, an inverted lek mating system, the first ever described in the aquatic environment.

Even though sexual selection is an extremely active research area, its precise impact on adaptation to anthropogenic change remains unresolved, with conflicting evidence emerging from the very few existing studies. Thus, I will also talk about our own approach to understand the role of sexual selection in evolutionary responses to environmental perturbation, namely by using genomics to definitively address the impact in adaptation to climate change (patterns of mating, sexual traits expression, phenotypic condition, genetic variance and, ultimately, survival of local populations).