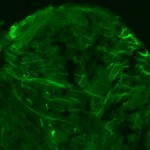 The study of the mechanisms associated with the production of new neurons in the adult brain, neurogenesis, is of paramount importance both for clinical and non-clinical reasons. Adult mammals, and humans in particular, have a very limited capacity for producing and integrating new neurons in existing networks or in places where neuronal death has occurred. This contrasts with lower vertebrates (fish, amphibian) where neurogenesis is widespread throughout the brain and where regeneration of large portions of the brain after injury, with a concomitant recovery of function, is possible. Interestingly, the high levels of behavioral plasticity observed in lower vertebrates, such as those associated with functional sex-change or alternative reproductive phenotypes, are not found in mammals. This suggests that drastic shifts in behavior within the same animal require a major reorganization of neuronal networks only possible by the recruitment of new neurons. We will test this hypothesis by studying the process of brain neurogenesis in a fish, the peacock blenny Salaria pavo. The project aims to contribute to the general understanding of the functional significance of neurogenesis in the adult brain.