Session 08m: Ore deposits formed at or near the seafloor: a perspective from ancient and modern examples

Type of venting and sampling

The Mount Saldanha hydrothermal field is located at a non-transform offset (NTO5), between the FAMOUS and AMAR segments on the Mid-Atlantic Ridge (N36º4´; W33º2´).

The top of the mount, where the hydrothermal activity occurs, it is characterized by the occurrence of a heterogeneous mélange of mafic and ultramafic rock outcrops, including altered peridotites (serpentinites and talcschists) and gabbroic rocks. Low-angle detachment faults are likely to be the mechanism for the exhumation of those lithologies.

in-situ observations revealed that hydrothermal vents are scarce and disseminated along the ocean floor sediment over an area of approximately 400m2. The video shows hydrothermal fluids discharging weakly through centimeter-sized orifices without the growth of chimney-like structures. In situ measurements of the exhaling fluids shown that temperatures did not reach more that 9ºC. However, mineralogy and geochemical data showed that in the subsurface fluids can reach temperatures as high as 269ºC  (Dias et al, 2011).  Also shown is the coring method used to recover sub-seafloor samples (video 1). 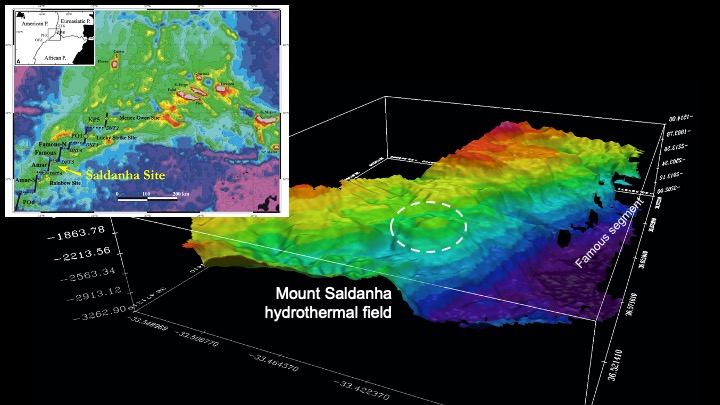 Figure 1 – Map representing the position of the Mount Saldanha hydrothermal field at the Mid-Atlantic Ridge and a schematic overview of the mount, highlighted with a dashed semicircle where the vent orifices were observed. Digital Terrain Models were generated with data gathered by EMEPC (Task Group for the Extension of the Portuguese Continental Shelf) during the Portuguese continental shelf extension program; ATP: Azores Triple Point; OPZ, PFZ and KFZ: Oceanographer, Pico and Kurchatov Fracture Zone, respectively.

Video 1 – Images taken by the ROV Victor (IFREMER) during Seahma cruise in 2002, showing one of the vent orifices located on the top of the Saldanha Mount emanating weak and transparent fluids and one core sampling, collecting materials precipitated below the sediment layer.

In this work, we combine S isotopes signatures, analysed in the sulfide phase present in a core collected in one of the active orifices of Saldanha field, with  bulk chemical  and Nd and Pb isotopic compositions published by Dias et al (2010 and 2011) in an attempt to understand the hydrothermal processes and trace the source of the ore-forming minerals at this field.

Sulfide mineralization in the Saldanha hydrothermal field is characterized by Chalcopyrite (Ccp) + Sphalerite (Sp) + Pentlandite (Pn) + Pyrite (Py) that were precipitated below the seafloor within a highly porous matrix composed mostly of serpentine + talc. These sulfide deposits are capped by a Mn-Fe oxyhydroxide crusts (see presentation  here: session 8m Goldschmidt2020) and pelagic sediments. As consequence, there is a clear down-core variation in metals content (e.g. Cr, Ni, Co, Cu/Zn, Cu/Fe, Zn/Fe and Mn/Fe). 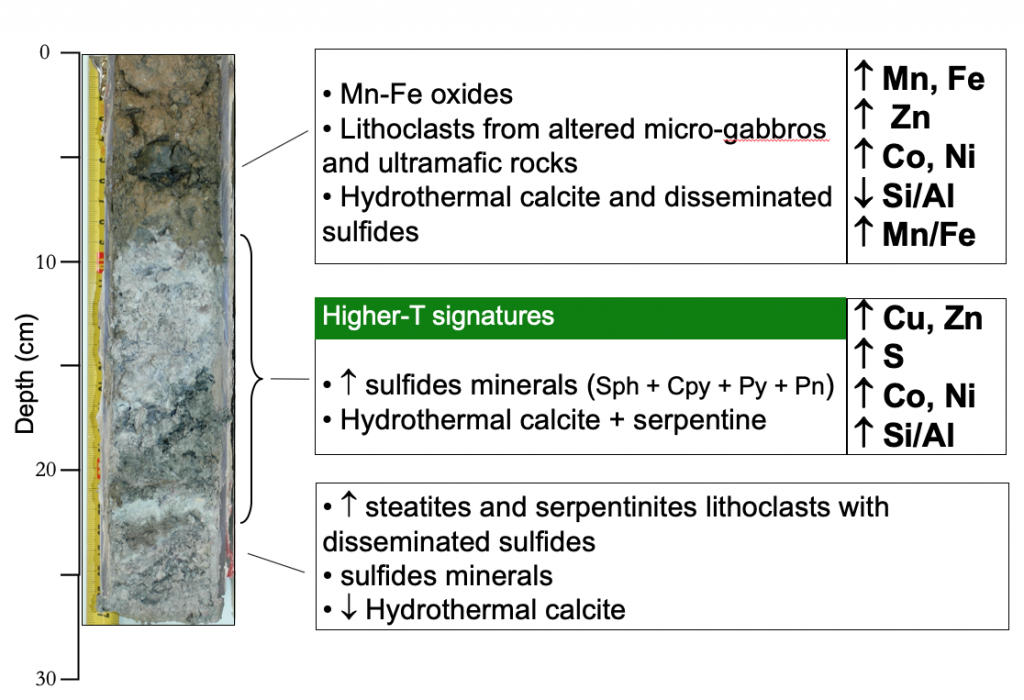 Figure 2 – Brief description of the mineralogy and metals content along a core collected at Saldanha hydrothermal field.

Rare Earth Elements (REE), Pb isotopic compositions and εNd(0) values recorded along the core (in particular 14-16 cm below subsurface, cmbsf) indicate that higher temperature hydrothermal fluid might be produced during the hydrothermal alteration of less enriched mafic rocks at depth. In the top layers, the geochemical signatures are coherent with physico-chemical conditions resulting from higher water-rock ratios interactions.

In situ δ34S composition of sulfide phases varies from 3.63 to 14.34‰ in Ccp, 5.62 to 9.07‰ in Pn and -1.37 to 10.47‰ in Py. δ34S signatures fluctuation along the core is in agreement with the above data. However, the high δ34S values in the upper layers suggest that δ34S enrichment could be related to reduction of seawater sulfate associated with a complete serpentinization of mantle peridotites at high water-rock ratios. On the other hand, the low δ34S values of ca. 0‰ recorded on some Py grains at 20 cmbsf indicate dominant mantle S sources that leached from mafic rocks by interaction with high temperature hydrothermal fluids.

Sub-seafloor hydrothermal sulfide mineralization is more evident below the surface, which is consistent with the occurrence of higher temperatures signatures at depth. Temperatures measured with the ROV probe at the orifice vent are the result of extensive mixing between the hydrothermal fluids and seawater.

Along Saldanha´s convective system, the unmodified seawater descends through the crust reacting with mafic rocks. Throughout these reactions, the geochemistry of seawater is modified, gathering the main isotopic signatures of the surrounding rocks. At the ascent zone, this fluid seems to also react with ultramafic rocks, recording additional ultramafic signatures. At the discharge zone, at the top of the mount, the fluids begin a precipitation process before reaching the surface due to the seawater penetrating along the pelagic sediment layer that covers the mount. The interaction between the discharging high-temperature fluids with the descendent seawater at the sub-surface results in a gradual cooling, and concomitant Eh and pH modifications, promoting the precipitation of Cu-sulfides at depth, followed by Cu–Zn and Fe sulfides and of Fe–Mn oxyhydroxides crusts at the top.