Macao, a Special Administrative Region (MSAR) of the People’s Republic of China since 1999 lies on the western side of the Pearl River Delta and it is bordered by Guangdong to the north and the South China Sea to the east and south (geographic coordinates: 22°10′N 113°33′E). The territory covers an area of around 30km2 and consists of the Macao Peninsula itself, linked through an isthmus to the Guangdong province, and the islands of Taipa and Coloane, which are now connected by landfill forming the CoTai Strip.

Macao Peninsula was originally an island, connected sporadically with mainland China at the north by a sandbar that gradually turned into a narrow isthmus. The successive land reclamation transformed the geography of Macao along the last centuries (see animated Figure 1). Currently, Taipa and Coloane islands are linked through an area designated by CoTai and together they form just one island. This island (Coloane – CoTai – Taipa) is connected, through three bridges, to Macao peninsula, at north, and via a tunnel to one small area in the Hengqin island (also called as Ilha de Dom João and Ilha da Montanha) at west, which is now under control of MSAR as enforced by a Macanese-Chinese agreement. In November 2017, the eastern part of Macao was connected to Hong Kong and Mainland China (Zhuhai) through the world’s longest sea bridge (HKZMB; 港珠澳大桥).

Before the Mesozoic Era (251 million years ago; for the International Chronostratigraphic Chart visualization click here the territory of Macao was totally submerged underseawater and the terrains of South China were drifting from the southern hemisphere to the northern hemisphere. The reconstruction of the distribution of the continents since the late Proterozoic (~650 Ma) until the present configuration and future distributions in the following 250 Ma can be also visualized here.

Only on the Mesozoic Era (the Age of the Dinosaurs, which spans from about 252 Ma ago to 66 Ma ago) the southeastern China region was affected by granitic plutonism generated during the Indosinian (Triassic Period) and Yanshanian orogenies (Jurassic-Cretaceous Periods), overprinting all previous events in the South China Fold Belt (SCFB; Quelhas et al., 2021a).

From a geological perspective, South China is a craton surrounded by the North China Block in the north, the Tibetan Plateau in the west, the Indochina terrain in the southwest and the Philippine Sea Plate in the east (Figure 2).

Macao is relatively distant from major plate boundaries, such as those between the Euroasian and Philippines and the Euroasian and Australian plates (which are, in turn, divided into smaller plates; Figure 3). This means that Macao is therefore located intraplate, i.e. far from a direct influence of the boundary movement between those plates. This fact explains why seismic activity is not so strong and frequent as it is, for example, in Taiwan or Japan.

Most of the seismic activity in Macao is related with its position in the Southeast Costal Seismic Belt of China (SCSB; Figure 4), whose dynamism results from the relative motion between the Sunda and Eurasia plates and which is absorbed by the coastal faults along the seismic zones.

Macao lies within the NE-trending Lianhuashan Fault Zone, bordered by the major faults of Shenzhen, to the north, and Haifeng, to the south (Figure 5).

Along the SCSB coastal área, the occurrence of earthquakes of small magnitude is relatively frequentement. Many are not felt by the population but are, nevertheless, detected by seismographs. On average, more than 10 earthquakes of M>2 are recorded per month in the Guangdong province (see reports on http://www.gddzj.gov.cn/gddzj/dzpd/yzqgk/index.html). However, this region has also experienced higher magnitude earthquakes, although with a longer recurrence period. Below, some examples of the historic earthquakes (M>5; moderate-strong intensities), that occurred in or near this area, and that were felt in Macao are listed (location; magnitude in the Richter scale; date):

Although the seismicity of the territory is generally intraplate and related to the Lianhuashan fault zone, it is possible to feel in Macao tremors that are originate from the neighbouring plate boundaries (interplate seismicity). It is the case of those generated, for instance, along the Taiwan strait (Eurasia-Philippines convergent boundary – subduction zone). Rare were the earthquakes, with the epicentre on that strait, that have been felt by the population of Macao. Examples were the earthquakes recorded on November 16, 2018 of M5.7 and on September 16, 1994 of M 7.3. Although they do not strongly affect the territory of Macao, given their distant origin, these type of earthquakes present an additional hazard once they are tsunamigenic (i.e., they can potentially generate a tsunami wave).

Petrology, Geochemistry and Geochronology of Magmatic Rocks of Macao

The territory of Macao (~30km2) is composed of granitic intrusions belonging to the Southeast China Magmatic Belt (SCMB), located in the SE area of the Cathaysia Block (Figure 7). This belt is known by the occurrence of large volumes of Mesozoic magmatic rocks (over 90% are granitic rocks and equivalent volcanic rocks with minor basalts), occupying a total outcrop area of nearly 200.000 km2 (e.g. Zhou et al., 2006).

The existence of two proximal but distinct granitic pulses, spanning for a time of about 9 Ma and separated by ca. 6 Ma, in the Macao granitic suite suggests that it was incrementally assembled. This hypothesis is also extendable to the neighbouring Hong Kong region, where the magmatic activity occurred in four major pulses spanning for about 24 Ma (e.g., Sewell et al., 2012). However, the MGII granites indicate the occurrence, on the Pearl River Delta region, of a magmatic pulse between those defined in Hong Kong at the origin of Lamma Suite (165–160 Ma) and the Kwai Chung Suite (148–146 Ma; Figure 9;Quelhas et al., 2020).

Besides, Rare Element Earth (REE) ratios (Figure 10) suggest that this pulse may only occur in Macao area, while MGI granites show evolving trends of REE ratios similar to those of Jurassic granites outcropping in vast areas of the Cathaysia Block (SE China).

Inheritance patterns in the zircon U–Pb data indicate the presence of a population of antecrysts (165–180 Ma) crystallized from earlier magmatic pulses and a population of inherited zircons, from Precambrian to Phanerozoic sources, incorporated into the magmas during melting and/or ascent/emplacement at crustal levels. The oldest inherited ages suggest contribution of Proterozoic and possibly of late Archaean crustal sources (2.4 Ga and possibly 2.9 Ga; Quelhas et al., 2020) for the Macao magmatism (Figure 11). 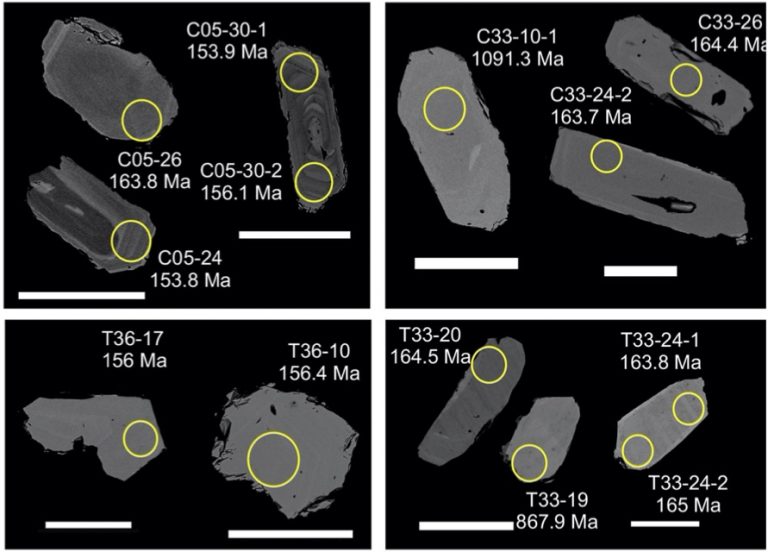 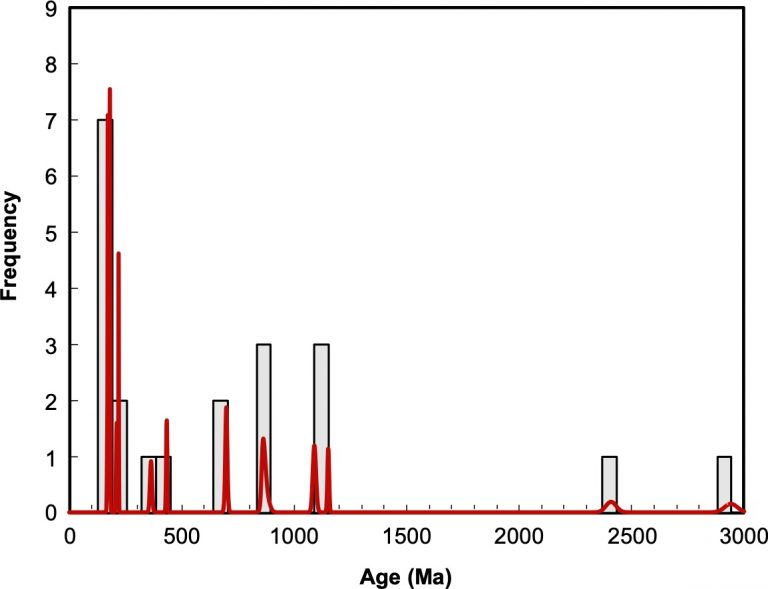 Figure 11 (a) images and (b) histogram plot of inherited ages of zircons from the Macao magmatic rocks (Quelhas et al., 2020).

The granitic rocks of Macao are mainly high-K calc-alkaline metaluminous to weakly peraluminous I-type granites with variable degrees of fractionation (Quelhas et al. 2021a) Moreover, isotope and major element compositions together with model ages strongly suggest that Macao granitic magmas were generated by partial melting of infracrustal medium- to high K basaltic Proterozoic protoliths heated, as mention before, that was mixed to some degree with mantle-derived magmas (more details in Quelhas et al. 2020).

The temporal and spatial association of Macao and SE China Jurassic I-type granites with basaltic/gabbroic rocks, syenites and A-type granites, displaying typical intraplate chemical features, indicates an extensional regime rather than an active margin for the origin of these rocks. It also points to an important role of mantle-derived magmas in the production of SE China Jurassic granites. Adiabatic decompression melting of the asthenospheric mantle produced mafic magmas, which underplated at the base of the crust (Moho), subsequently triggering partial melting of the lower crust to generate the granitic magmas. The Jurassic Macao granites are interpreted as being produced in an intraplate extensional setting related to the break-off and foundering of a previously Paleo-Pacific flat-slab beneath the Eurasian plate (Figure 12).

The boundary between east and west Cathaysia blocks is roughly along the Zhenghe- Dapu Fault (ZDF), which intersects the SE China coast near Hong Kong and is thought to have played a major role for the Mesozoic magmatic activity in this region. The stronger isotopic affinities of Macao granites with the other granitic rocks and lower crustal xenoliths from the western Cathaysia Block suggest that the ZDF is likely to pass south of Macao. 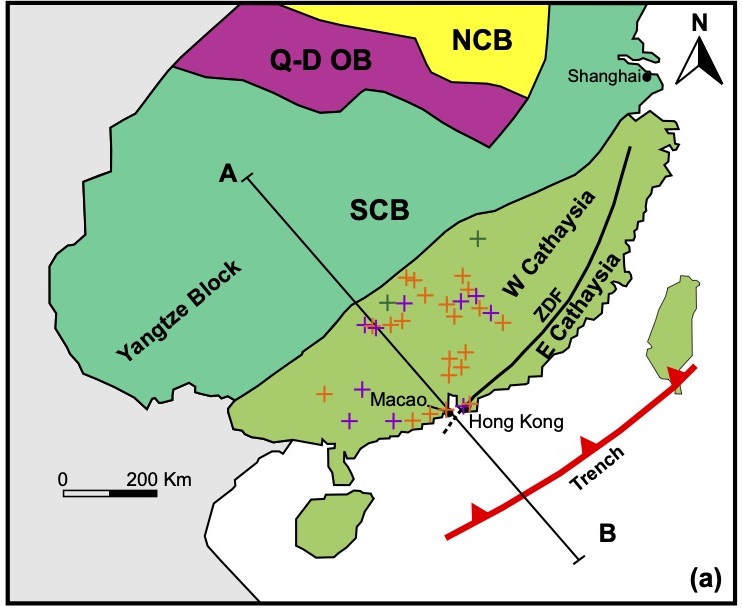 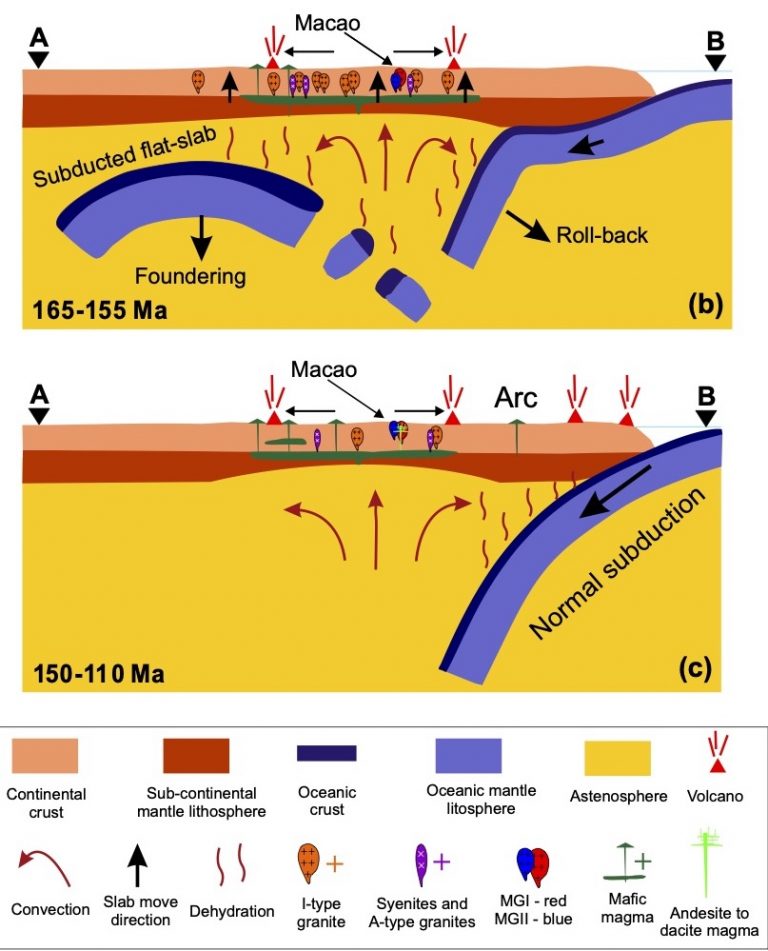 In addition to the Early Yanshanian (Jurassic) granitic magmatism in Macao, the younger ages obtained for the dacite dykes indicate that the territory was also affected, to a lesser degree, by Late Yanshanian (Cretaceous) magmatism. The transition from granitic to dacitic magmatism most likely corresponds to a change in the regional tectonic regime, which induced a significant change in the magma genesis processes. In contrast with the intraplate features of Macao and SE China Jurassic granites and coeval mafic rocks, the dacite dykes of Macao seems to be generated by arc-like subduction related magmas. These dacites are most likely evolved products of arc-like magmatism and may testify the reestablishment of a normal subduction system in this area of SE China (Quelhas el al., 2020).

The new Geological map of Macao (Figure 13) is now available in hard copy and in GIS format (geographic information systems) and was published in the Journal of Maps (Quelhas et al. 2001b)

The territory of Macao was mapped in a more comprehensive and detailed way, through the acquisition of data obtained over several field trips and based on petrographic and geochemical studies carried out during the MagIC project (FDCT 043/2014 / A1). In this new version, information is provided in English, Chinese and Portuguese. The map is available through this website; however, its source must be acknowledged (@Geology of Macao, ISE website, USJ, Macao) and reproduction for commercial purposes is prohibited. Currently, only a low-resolution map can be obtained; a high-resolution version will be available after its final publication.

Note: the map and a representative sample collection is available for consultation in the USJ Library

Before the new map, the complete official document reporting the geology of Macao was published by Ribeiro et al. (1992). The document consists of the Macao Geological Map (“Carta Geológica de Macau”; Figure 14) at a scale of 1:5000 and an accompanying memoir (Ribeiro et al., 1992), edited by the Serviços Geológicos de Portugal. The first published works describing the Geology of the Macao territory and its main lithologies date from the mid of the XX century (Carrington da Costa, 1944; Carrington da Costa and Lemos, 1964; Lemos, 1963; Figure 15) which also produced the first draft of a geological map of Macao. Later, Marques (1988) also contributed to the knowledge of Macao’s geology with a study strongly focused on geotechnical analyses. Here, relevant stratigraphic sections were presented through the study of cores collected in the territory.

Publications about the geology of Macao

Geology of Macau in the News (Portuguese)